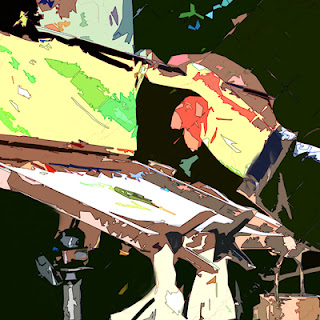 I remember the last painting he ever made.  The colors, the memory of its creation, its absence from the walls of the family home haunt me and often come to me in fragmented thoughts and dreams that rise from the black and green pools of unconscious thought and find my waking mind like water drawn to the surface of a desert by some miraculous force.
I wonder how much of his life, how much of my life was reflected in that paint, in the colors and shapes he brought into existence.  How much of it was a blueprint for what was to come, the tea leaves of a man brought to vibrant life by his own hands, delicately choosing the brush thickness and pigments that would forever remain, at least in my thoughts.

The metal easel was set up in the corner of our large, light filled patio, my red child’s size easel was close to his…papa bear and baby side by side.  The homeowners before us had added the patio and we used it for birthday parties and occasional grilling and for some time, perhaps years, I don’t remember exactly, an art studio.
The walls extended just to hip height, above that it was windows to the ceiling. In the right hand corner, just off from the sliding glass door which led to the formal living room, was a world of paint and chemicals in small metal canisters with thumbprints over them in red and black and mixtures of the rainbow.
Our large table he had made of an old wooden door that had been left in the garage and it was held horizontally by two wooden legs he had also made, using crude and rough lumber.  Serving as a thick six foot table, he pushed it against the wall which faced the wooden deck.

In the corner, to the left of the table, were the easels, directly facing the blue pool just beyond the windows. He arranged his years of collected supplies in a methodical way along the back edges of the table.
Towards the middle were old jars in a variety of shapes and sizes which held the brushes. There seemed to me every size and option, thick-handled ones of smooth wood with a thick bunch of hairs at the end, other more dainty, with thin handles and perfectly pointed tips meant for delicate line work. Others had bristles in the shape of thin fans and there were dozens of other brushes, each designed for a particular purpose.
To the right of the jars and brushes were the chemicals; turpentine and paint thinner and half a dozen others I never bothered to learn.  Beside them were empty jars to use during cleaning and a small pile of rags meant to wipe off paint and solution, though I ruined many of his brushes by neglecting this crucial step.
Along the back left side of the table were a mountain of white tubes, each one with a strip of color at the top which promised the containment of vibrant oil paint in every shade imaginable.

I knew he had been a painter, the walls of our living room attested to that. There were several rich and moody paintings of surreal shapes and people, the subjects of which seemed barely real. There was an aesthetic about his work that seemed to favor particular colors, or particular shapes of particular colors; he loved maroon, black, green and orange and touches of white for shading.
But though I knew he had been a painter, I had never seen him paint until the day he began his last.

The canvas on the easel went through a series of changes, I watched from my seat on the couch just past the other set of double sliding glass doors which led to the informal living room as he applied the first layer of white gesso, then later above it a background of dark green and black. He used the fine edge of his palette knife to push the paint on the canvas, the effect creating simultaneously smooth strokes with slightly  thicker edges, all of which made subtle mixed textures of the green and black paint, blending them in such as way that it was hard to tell what was black and what was green, they seemed to melt into each other, just hinting of the other’s presence, an allusion to color that seemed to me full of questions and mystery and deep penetrating substance. Two colors that were full and alive, whose presence seemed to go deeper beyond the simple thickness of the canvas, deep into time and lineage and space.

For weeks, perhaps months, I cannot remember, he added more. Above the magical darkness, suspended among the undulating green and black was a single leaf.  With no tree or branch beside it, the leaf hovered in bright contrast to the rich darkness and texture of the background.
It had a somewhat tropical feel, with a wide face and slightly wavy edges that seemed to mirror moving water in their ripples. I watched its existence manifest with layers of green, dark and light along some contours and in other areas of the leaf a hint of yellow.
He added strokes of white using both the thick and thin brushes and created definition and shading and movement on an still surface.  To me, the leaf was bright and buoyant and perfectly contrasted the deep darkness where it floated.

I thought he was done, but then several weeks later he added more. They were big and bulbous drops of red, yellow and white water which, to me, looked angry and full of vengeance.  The drops came from the upper right hand side of the canvas and crashed into the delicate veins and cellulose of the leaf in the center, pushing into it and destroying its simple existence.
If the leaf had contrasted the color and mysterious mood of the darkness behind it, then the drops were in direct conflict with the mood of the leaf. To me they seemed to vibrate with vicious violence, intent on destroying the cool elegance of the leaf with raw red power.
I was scared of what the painting had become.  The drops of red and yellow and white filled me with a sense of fear. I cannot remember what I said to him, if it was anything at all.

The canvas never made it to our living room walls where the few survivors of his days as a painter hung. I never saw it again.
It took years, but at some point the many jars of brushes, the tubes, the table, the easel, it all went away, perhaps slowly, perhaps all in one day, I cannot remember. I do know it was the last painting he ever made.