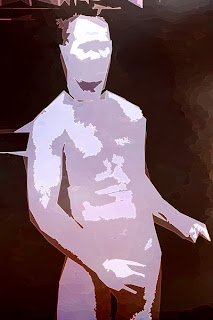 The chorus rumbled, loosening the answer from their stomachs, letting the deep sounds and grumbles manifest into words they knew the crowd would recognize. Things formed. Small things turned into larger shapes that had tails and wagons and little bits of paper that drifted after their tails like sparklers on a warm summer’s night. The room cleared of other thoughts, waiting expectantly, patiently. Silence rumbled from the stone floors and the mosaic tiles along the walls, waiting. And as they waited the things edged forward, the sounds moved into formation, and then the tongues sprang to life, knowing where to go, how to move.

The answer came.
He’s arrogant and proud and likes the best things of everything. Deep red wines looking like fresh blood swirling in a crystal goblet. Satin sheets for him and his room of full-hipped lovers in little more than colorful scarves. He takes milk baths and freshly made goat cheese served on bejeweled platters. His world is that of comfort and opulence, pride that manifests only from his material power and earthly wealth.

The king? He cannot see that death comes to all, then beneath all spun, golden robes, beneath all skin are bones and flesh that eventually, sooner or later, turn to dust. Blinded by his gilded palace and bountiful gardens, his earthly finery and servants responding to his every desire, he has forgotten that death comes for all things.
One day he will take his last breath. He is not prepared. The core-shattering moment will come, it will come like a new dream and he will look out over the abyss and see that his life was full of things and pleasure and matter, but it was devoid of help.
Help would not come from slaves and servants and the maids of his palace. Help would be uncomfortable, it would pull at the self he had created, it would twist him in all directions, leaving him panting, looking for the window. But he has no help and he takes his luxury for immunity, but death does come.

He cannot see the moment, but the banished witch in her hut watches the events in the smoke of her fire. She can see his gasping last breath, the moment of transition when he truly realizes the time he has wasted, that he has done nothing that will take him towards the clear light of awakening. She watches the curling twists of smoke, knowing she cannot help him, for one must seek help.

What is the king like?
The chorus takes a breath of air, preparing for the next stanza. Again, inside, their answers release themselves from the inner walls of their bodies. They merge deep inside, then find their way out into the air in recognizable form.

Miles away from the thick woods and icy river and old witch, far down the path that turns to gold by the wrought iron gate of the castle, lives a king who is blind to the clear light. In the middle of spring, two days before the new moon, two lankly and well dressed men arrive at the palace gates. Seeking an audience with the king, they claim to be tailors of the highest order. Their credits include royalty throughout the old world as well as the new. Across the deep oceans of the globe, the most important men wear clothes made by their hands. Their secret is the magical cloth, they tell him. Cloth that can only be seen by the most deserving, royal, important men, all others are blind to its magic and colorful wonders. The king, knowing himself to be a man of the highest order, has the tailors make him a new set of clothes for the upcoming spring parade.

What is the king like?
He is dying, not from disease or old age, but atrophy. He breathes, but he dies. He lives, but he does not work, there is no world for him beyond matter. The skeleton behind his meaty cheeks has turned into vague promises he does not intend to keep, promises of the real, promises of a day that will be beyond his control. He cannot imagine such a time. His coffin is empty, for he does not believe in death for the glorious.

After many weeks of working in the stone room on the bottom floor of the castle, the tailors finish the king’s new clothes. In a room full of mirrors, they help him step into his beautiful new pants, his fabulous new shirt and electric robe. The tailors smile and nod, congratulating themselves on a job well done. But as the king looks into the mirror, he sees only thick bare flesh.
“Now you are dressed as all important men should be! And remember, only the truly deserving will be able to see your clothes, this magical cloth reveal true virtue.”
As he looks at himself, naked and covered in patches of thick hair, he nods, remembering his position, his stature, his glory. He begins to nod. “Yes! What fine work you have done! Amazing! Truly a work of art.”

What is the king like?
He is covered in the veil of his habits. A thin, silky veil that blocks out light. It covers him in worn patterns, making his sticky flesh turn to stone with each repeated thought and gesture.

With his new clothes he walks proudly into the square just beyond the iron gates to the castle. Nearly all loyal subjects of the kingdom are gathered on each side of the golden road that leads eventually to the river. Man, woman and child crowd to take a look at the king.
They all hide their surprise as they see him stride confidently down the road without any clothes. By the tallest black walnut tree one small child, no more than five years old, cannot hide his surprise as his parents do:
“The king is naked!”
The witch can see the child is not dead. The child is not stuck in patterns made of stone.
Posted by Mad Dog at 1:00 AM No comments: 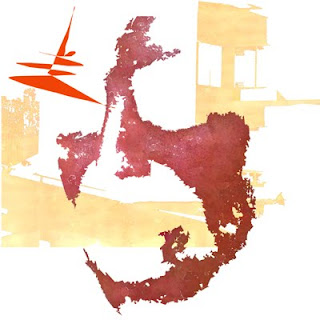 The question was asked, and I skirted it like a child running from a wave moving quickly across wet sand.
What is my nature? Too many things cloud my mind, opposing thoughts, statements made and then refuted. I search through the mess, looking for a simple answer. But even that word hurts to look at, like a glare from the sun that could burn to the core of me, making me blind and sweaty and full of hardened thoughts. And so I run skeptically, chasing foam and seawater though staying clear of its chilly touch. Every answer is a guess. But maybe that’s fine, just a tiny lap of water on my calves won’t hurt.
And so what am I?
Am I the moving arrow? The thing moving through time, the constant motion of work.
Eternal.
And this thing, this essence... I truly search for some word, anything to describe it, but it slips through even the most outstretched part of my mind. This thing invisible yet tangible. This thing, quiet and eternal. Energy. A lost sentence made of color, shape and turns.
My function? I am the vessel, the thing through which creation moves.
I am the open door, the portal to the other sides, the other places, the realms where there is different knowledge, knowledge without facts and dates.
On earth, am I the Other way? An example of something else, one of the many paths.
I am another option.
Am I the fish in the river, a creator on earth, choosing time over money?
Colorful, lazy, moving, working through tears, watching sunsets and computer screens.
Am I the future teacher, now the student?
I am a link in the chain, a pink tile in the mosaic of our lineage, another vessel that leads forwards and back. There are truths that cannot be explained, and with each small remembering, I become a stronger link into the past, connecting to the future that waits for my return.
I am the door.
I am the dreamer alone in my bed. I am the dream of another playing with fire and paint while eating donuts. I am the being that struggles under a cloak of confusion and learned rubbish.
I am the vessel, the fleshy pot holding something precious inside, the thing I have glimpsed rarely. This thing that I cannot describe, the essence I search to understand. I am the hidden, the cracked door. The flickering light.

And so I play with the thoughts, searching slightly for something, something, anything.
There are a dozen question marks behind my thoughts and each answer depends on the day, on the rain, on the mood in which I sit and listen.
A thousand changes and the questions turn in on themselves, becoming laughter blowing in the wind, a hint of jasmine as we tilt closer to the sun once again.
My essence is the shifting of time.
Constant.
In motion.
So close.
Yet somewhere beyond the stars.
Posted by Mad Dog at 12:58 AM No comments: