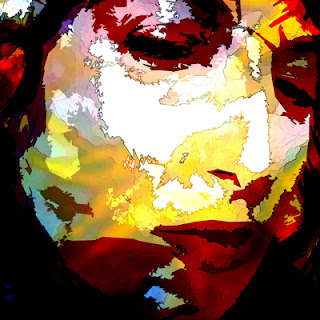 I sit here, my mind playing, bouncing between two sides of a colored spectrum.  The question lingers, reverberating through every memory as I sift through the contents of three known decades in seconds and wonder about other lifetimes on the fringes of easily lost dreams.
Did I make the decision to take it in, or did it chose me? I, an open vessel, lights blinking, looking for port.  Did I decide to take it in one day while peeling apples at the kitchen counter, old tiles all stacked full of fruits and old melons rescued from the bin?  Was it a choice?
The thoughts roll though me as I stare at the moon.  A cool summer breeze full of jasmine and tangible teenage memories of long midnight walks flows past me, igniting the soft skin on my arms. I stare at the moon, awash in its pale calming glow.  The lights around blink as distant worlds do.
Do choices begin or are they like stones tumbling in the ocean current, bumping off one red-haired mermaid and another until you find yourself in an unfamiliar house in a foggy city, surrounded by people you’ve known for years but seem like newly-acquainted strangers.
I squint my eyes and look for the trail.  Just how did I get here and what is this?  I think back- when did the choice come?  When the doors opened with a small ding?  When I went down, skirting the equator by just a few hundred miles?
I was looking for something then.  I searched for it in the eyes of every person I saw, looked for it in unfamiliar cities and in the arms of strangers. When did the doors open?  Each choice begets the next and they lap against each other, altering the north wind so that orange butterflies can dance in the hurricane winds of time eternal.
I think back to the night so long ago.  A night beside a house on the edge of a hill.  On the cemented patio, beside the blue sparkling pool, we looked down at the smog-covered city streets below and sucked on small pieces of tasteless paper.
Those people with whom I attempted to travel, I thought I would always know them, carry their names and numbers with me as the years changed my skin and hair.  But that, as all things do, changed.  That night we sat in plastic lawn chairs in the summer twilight, watching as city lights turned on and started blinking, talking to us through the altered gray air.
The house, I would later come to understand, was inspired by the architecture of Frank Lloyd Wright, but at the time, I just observed the clean angles, the lack of tightness, the open, flowing use of space.  We sucked on little pieces of tasteless paper and as the sky turned darker and the lights started to blink, as other worlds do, the familiar faces and words lost the meaning I once understood as inherent and fixed.
I think back to a day so long ago sitting on the bright grassy lawn of my junior high school, El Roble. We picked small white clover flowers and turned them into garlands.  We sat like children, so utterly content to lay in the field.  The grass, so much more green.  The grass, so much more soft.  The sky, so much more blue.  There was nothing else to do, nowhere to be, no one else to find.  It was utterly perfect, the moment without rush and obligation.  That day, so long ago.
When did I decide to take it in?  Was it a decision or a series of accidents?  Me, or it moving through me?  Paper, door, blinking lights, other worlds.  The open door, blinking lights, eyes I can no longer remember and black shadows.   It can be different.  It takes one tiny piece of paper, a little sugar cube, and worlds dissolve in your cup of water.  Did I decide to change, or did the change find me after one tiny, tasteless piece of paper? 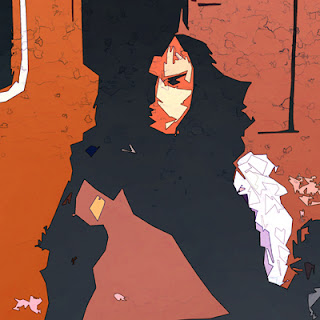 The giant barks.
I bark back.
There is only one way for a giant to act. I know this.
I have read it in story rhymes,
so many stories, so many rhymes.
Then I finally encounter one, I am offended by what I see.

The giant barks, sitting on all fours.
His sneakers chewed up and smelling of bile.
Where has this creature come from?
Not even the swamp down by Knott’s old road house could have produced such a dank creature.

This is not what I wanted to see this early in the morning.  Out for a morning stroll, thinking about a good breakfast, some sausage and black coffee, maybe a smile from Bettie. I wake from nightmares with visions like this, but to see it barking out on Upper West Tollridge like the full moon was out, like transformation is upon him- I must do something.

The giant barks and I bark back.  I release my savage dog.  The wild rascal I have tamed inside.  My skin starts to burn with the boil of hate.
Soon, the night is black, smelling of old rotten things and dark, still waters that have not moved in centuries.  I took him by surprise, myself, covered in the scent of fish, of old and new cigars.

When the giant barked, I barked back.